I'm kind of quick to get into costume. I was going to the costume party as a Godess/aspect of death. My vampire larp character Talulah Jezebel lent me her "Cross Tear Safetypin"- body. I wore knee lenght lace thights and a red loincloth. But as you can see, the makeup and the "Hair" was  the real centerpiece to my costume. The head piece was made out of stocking, a feather boa and a scull tea light. That is supposed to be Deaths Poison dripping from my lips.

After putting this together I had dinner with some amazing geek women (and men) and was very flattered by the attention and the amount of compliments my concept and costume got. It could be that at first there weren't that many of us in costume since most where saving themselves for after the Swing Dance lesson.
After dinner I had to reattach the head piece in a much better way and found Tore ironing his nerdy Apeture Science T-shirt in mine and Teresas room. He then snapped the picture above and I got back to the Dance Lesson. By then I had missed the first, most basic step and had to spend most of the dance lesson playing catch up. After we, as a group had mastered the next level, we were asked to find a partner to dance with.
A flash of High School uncertainty and then Osher from Israel, who had been dancing nearby came and scooped me up. Yay for the costume giving a sense of security. After a while we were told to switch partners again, and once more I didn't have to deal with rejection. It was nice.
I was milling around when someone told me I had to go to the bar and meet someone... I opened the door and knew directly who they were talking about. The Dark Lord himself, a deliciously well dressed Jost L. Hansen. Together we formed "Team Evil" with some of the other "Dark side"-themed participants. 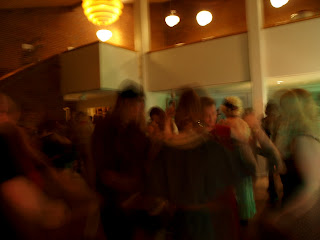 Of course, no matter how much fun I had at the dance lesson, once on the real dance floor at the party I didn't manage to do more than a little swing dance until I lost everything I had learnt. Fortunately we still rocked the dance floor, both with the crew from the Swedish Larp Workshop, with Onni, and once more with Osher. Osher actually knew how to dance and got me to relax and enjoy my time on the dance floor like a true "Diva of Death" (Enter all kind of puns about dancing with death and so on and so on).
After a while I wasn't the only one who went and dressed down. The I joined Sarah Bowman and her followers in a big cuddle which I really needed. (I was kind of homesick).
I fell asleep in the wee hours of the morning.
Sunday was the last day, and after breakfast and a few other program points (which I did not attend) there was a short meeting with a promise of "Next Year in Finland". Some might have cried, others where comforted with international chocolate in the "Chocolate Exchange Program" which sent you home with a candy bar to ease me back into normal life. I got to see that Martin Ericsson was still alive. (Mixed relief? ;-) ) Me, Onni, Tore and Sara Hjalmarsson played tetris with our luggage in Tores small car, and where on our way home.
A grand adventure.
But as always is the rule of a grand adventure, there is nothing like home, and the sweet embrace of my child and my partner. Who had dinner ready on the table when I got home.