Do you want to date my character? About sexual in game relationships at larps.

Background and disclaimer:
This is a translation and repost of "Får min karaktär chans på din karaktär?" Om sexuella relationer på lajv." The original post was written i Marsh 2015. I have a background in mainly Swedish larping and have mostly been to Vampire, Low and high Fantasy and post apocalyptic games. I have been to some Nordic Larps and participated in both the swedish larp con Prolog and Knutpunkt. I larp mainly at games where, if you want to have an in game relationship you have to go and get your coplayer on your own, where most larp organizers will find it an odd question to help out with. I also find that the swedish tradition is pretty "What you see is what you get" compared to some other larp traditions. 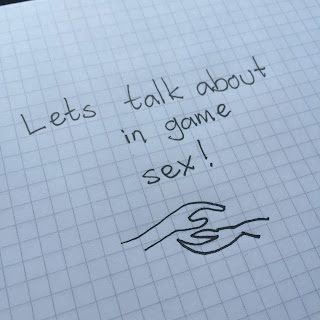 Do you want to date my character? About sexual in game relationships at larps.

Sometimes when I am building my character for a game I'm going to, I start thinking about my characters intimate relationships and what they look like. That it would be nice if there was another character present at the game that meant something extra to my character. Someone my character had a relationship with. A sexual relationship.

What are the pros with playing a character who has a in game sex partner present at the larp?

But I still need to get at least one player who would want to play such a relationship. Most larp that allows characters to have in game sex uses different representational techniques to symbolize that characters are performing a sexual act during the larp. Or you go out of game together and talk about what you did in game while they where away from the others. I can tell you more about these techniques in another post. So, it's not like your are asking someone to engage in real sexual acts with you and it shouldn't feel awkward to ask?

But it does feel akward.

I've talked to a lot of larpers about this, both face to face, on the phone and in several facebook groups. A problem that came to light was that several men who wanted to do "the right thing" said they rather not ask women if their characters could have a sexual relationship. Some men said it was because they did not want to be seen as creeps/creepers and some men where worried about making the woman they asked uncomfortable. Some men said they were just shy or that they feared getting a no.

To me, gender matters as well. I have no problem at all with asking women, both women I know really well, and women I'm just acquainted with but that I thought about wanting to larp more with in the future. It usually runs very smoothly once we get to the larp and are trying the sexual relationship out. One man I talked to said he felt them same when he asked other men, and that he worried less when asking men.

To me it's always a little tricky to ask men. I'm almost always the one to ask and extremely rarely get asked. I can only have theories about what that is about. It can because I'm assertive and not very shy about a lot of subjects that other people find difficult to talk about. But I also belive that there are larping men that think I would be offended by the question because I'm a feminist. I would not, and honestly I would probably be flattered as long as I get to feel it is fine to turn the man down based on my own preferences and my thoughts about my own character. There are people I really don't want asking me, but most of those people know who they are. And if I've been in a fight or disagreement with someone doesn't have to be an end all. To play a positive relationship with each other, or play people who would do anything for each other can have an incredibly healing effect that can bleed over into your real life.

During these talks what crystalized was that is that you can ask/need to ask before the larp but that the situation can need to be adressed during a game where something changes or where a new relationship starts. Check in to find out what kind of relationship the players want to play now. Several told me that it had been a grand revelation to them the day they realized it was ok to go out of game for shorter or longer meeting about what they wanted and what their coplayer wanted. Other just wanted to play prepared and rehearsed sexual relationship where consent was already established because they found it really hard to get back to immersion after being interrupted. Instead they chose a safer router of not having that kind of in game relationships or kept all in game interaction very platonic.
Several people told me that it was very important to them to know what the other larper was thinking and feeling about the relationship, both the one who asked and the one who got asked. They wanted to avoid hidden intentions. I myself has an ethic that is more conserned with consequenses and less with intent. I don't care or judge so much based on hidden inten. I'm ok as long as the other person is happy and treats me right out of game, no matter why they are happy or treats me right.

After you asked another larper the question about having an in game sexual relationship and you found someone who said yes, it's really important to talk consent, wants and needs. You can approach this in a number of different ways.


Several women and men I spoke to declined having in game sexual relationships. Why? Well they had different reasons.

Anyway, this is an existing topic that we will probably return to in the future. I would love if both men, women and non binary people start thinking about if in game sexual relationships is something that they would like to play, and how they would get around to finding coplayers in the future. How they talk consent and what they really want to get out of the relationship. But if you want this type of play, please work on asking in a way that makes the other person comfortable with both saying yes and saying no. I felt it was sad that so many men that said they would like this kind of play felt it was so scary to ask that they didn't. If you ask in a nice and respectful way, you are not oppressing anyone.

But if you are very much older, maybe you shouldn't ask a much much younger larper, and this goes a lot for older men, due to us living in a patriarchy.