Who do you organize your larp with? 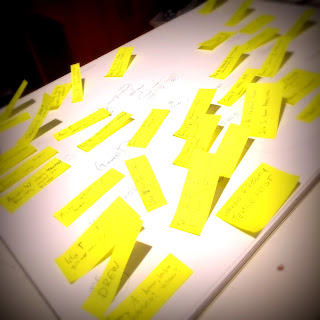 [Disclaimer: I work within a Swedish context. I'm mostly writing this post to get my thought down and onto the internet, in case this becomes a discussion further on. I'm not writing this to harm or criticize individuals. These are just my observations and even if I have a very straight forward language I am almost always open to being wrong. No observation I make will ever account for all cases.]

I sometimes get the impression that male larp organizers mainly organize their games with men they "drink beer with" (socialize in a public or semi public setting, drinking alcoholic beverages). Women can be part of this group under a flag of being "one of the boys".
They also organize with women they have a close, sometimes even intimate relationship and once in a while they organize together with a woman who they find to be absolutely brilliant.
But to find a woman they don't drink beer with or have a close relationship with absolutely brilliant they also have to be reminded of her again and again and how good she is at what she does. Maybe she has a lively larp related Instagram? Maybe they are friends on Facebook? Maybe she is involved in several other larp projects this year? She must also not be scared of self promoting herself, something women are often not used to and sometimes think is shameful.

If you find you are a male organizer who might be in this pattern here are some suggestions:


A male friend of mine (I can name you if you like) said that the project of organizing a  larp can be used as an excuse to hang out and have an experience together. The larp organizing project helps you fulfill your emotional needs and need for feeling like a part of a community working towards a common goal. Instead of going "I like you and would like to spend more time together" - you organize a larp.

I have this theory that  you can also sometimes choose to organize larps with people you already feel emotionally close with. Because you got drunk together and you became more social and outgoing and came up with a project to do together. Or maybe oxytocin played in?

I'm not saying this is the wrong way to organize larps, we organize in different ways, but sometimes our methods doesn't wield the results we wish for and maybe an inventory of who we organize with can show us other ways to do it?

Next thought: If you are a woman setting out to organize a larp, who do you ask? If you are non-binary, has that affected who you ask?
Upplagd av wonderkarin kl. 21:41